On Tuesday, March 29, 2022 at 06.30, Professor Dr. Sombat Thamrongthanyawong, Acting President Walailak University presided over the merit-making ceremony, offering alms to monks and dried food to the monks Participate in the Islamic prayer ceremony and the prayer of blessings of Christianity for auspiciousness On the occasion of the 30th anniversary of the founding of Walailak University with Mr. Trairat Chairat, Deputy Governor of Nakhon Si Thammarat Province Colonel Suwat Thongbai, Deputy Chief of Staff of the 4th Army Area, honored guests in Nakhon Si Thammarat Province, executives, personnel and students of Walailak University attended the ceremony at the lantern yard area. botanical park and personnel of the building, participating in activities on the 30th anniversary of the founding of Walailak University 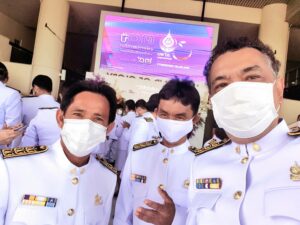